Why is it said that black cats are bad luck? During the Halloween season there are many decorative elements that adorn homes, malls, restaurants and shop windows.

Among them there is never a lack of bats, witches, spiders, ghosts and black cats, the latter being animals that have always been associated with misfortune and the darkest night of the year.

But why are black cats said to be bad luck? Where does the belief come from that these little cats have some kind of relationship with bad luck?

Of course, this is a very curious statement that in Wikiduca has led us to take an interest in their origin.

That's why, taking advantage of the fact that the night of Halloween is very close, through this post we wanted to find out why it is said that black cats bring bad luck and share the answer to this question with all of you.

Before knowing it, remember that through the pages of this blog you will also have the opportunity to discover many other things about the night of Halloween.

Many studies over the past few years have shown that owning a cat can be very beneficial to all members of the family.

Nevertheless, the elegance and beauty of these small cats has not prevented that, during centuries, the black cats have been intimately bound to the bad luck.

To understand the origin of this belief we must go back in time to the 14th century, when the terrible black plague killed between 30 and 60% of the European population.

Although it was the rodents that transmitted the disease, at that time those affected associated it with cats and blamed them for the spread of the epidemic.

This led to the death of many, many cats, even though they actually helped to exterminate the mice, which were the true transmitters of bubonic plague.

However, the rejection of black cats is not only caused by global pandemics, but also by witchcraft.

This is because, during the time of the witch hunt, black cats were also persecuted after being accused of having ties with them because many became their companion animals.

Also, some time later superstition went further and many people believed that when they died, witches became a black cat, which further fueled the contempt for these small and innocent living beings.

Although even today it is said that black cats bring bad luck due to popular beliefs, we must not forget that in some countries this superstition has no validity.

The Japanese, on the other hand, consider that having a black cat at home can be very positive and that it even helps young women to find a husband. 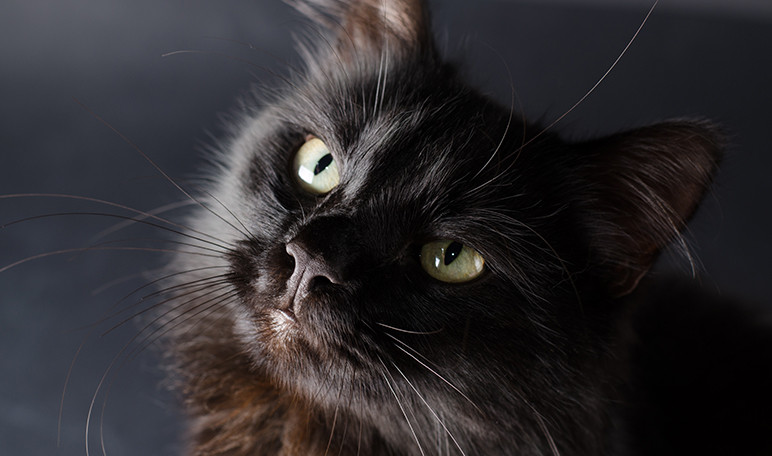 Other interesting facts about black cats

Although it is still said that black cats bring bad luck in many regions of the world, there are some very curious facts about these animals.

One thing to note is that the black kitty has a greater chance of having a strong immune system than small cats of another color.

The reason? That melanism, or what is the same, the excess of dark pigmentation, makes these animals more resistant to pathogens and their chances of getting sick are lower.

Another striking curiosity is that, despite the contempt generated by black cats in the past, the ancient Egyptians felt admiration for these small cats because they associated their dark fur with the goddess Bastet, protector of the home.

As you can see, there are many curiosities about black cats and, although superstitions have less and less weight in society, the dark colored cats still enjoy a great role during the Halloween party.

If you love the night of October 31st and want to experience it to the fullest in the company of your children, remember that you can celebrate Halloween in PortAventura.